Del Monte is giving away 500 sneakers and more

The “500 Sneaker March Giveaway,” hosted on the Del Monte Fresh Produce Facebook page, will randomly award 500 sneakers to Del Monte Facebook fans who enter the contest and ten (10) Wii packages to people who get two (2) of their friends to sign up.

Step 2:  Enter sweepstakes and sign the pledge to make at least half your plate fruits and vegetables and exercise more frequently.  You will automatically be entered to win one of 500 pairs of sneakers. 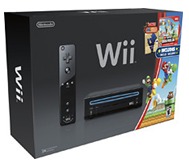 Step 3: Click on the “Sneaker Giveaway” tab then the “Invite Friends” to share news about the giveaway with your friends.

Step 4:  Get just two (2) friends to enter the sweepstakes and you will be automatically entered to win the Nintendo Wii New Super Mario Bros. Pack game console and Wii Zumba Fitness

All entrants will be encouraged to sign a pledge to exercise at least three times a week for thirty minutes and, as the USDA recommends, make half their plate fruits and vegetables.

Review/giveaway disclaimer: I received no monetary compensation for this review/giveaway. I received Del Monte Fresh Produce gift certificates to thank you for participation.