This is the first year Masha agreed to sit on Santa’s lap. Moreover, she did not want to leave him. She told Santa what she wanted for Christmas. Apparently, she wants a “cage for dolls” (first time I heard about it). This is probably one thing Santa does not have readily available in his vault (or bag?) of toys.

After further questioning, Masha explained that she wants a horse which will live in a cage and a doll which will ride this horse. Should I attempt to find something like that?

We were lucky to find a patient Santa who listened to the whole story. 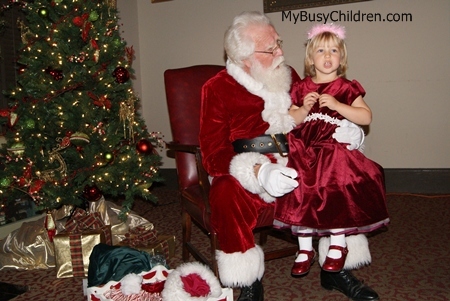 Masha also told him about her sister and possible reasons she did not want to come anywhere close to Santa.

Somewhat bedazzled by such attitude from the baby, Santa invited me to sit on his lap while holding Lana. This was not a very successful strategy since Svetlana hid her face in my shirt and refused to look at anyone in the vicinity. 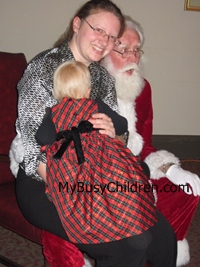 This was the first time I ever sat on Santa’s lap.  I doubt he will invite me to sit on his lap ever again. I might have a chance if I lose some weight by next Christmas though.