“Let’s play a game. I want to do something fun. Do you have an activity we can do together” , asks my preschooler whenever she is not in the summer camp. My arsenal of new games and activities is quickly diminishing but I never thought about playing a board game with her. She is surely too small, I tho 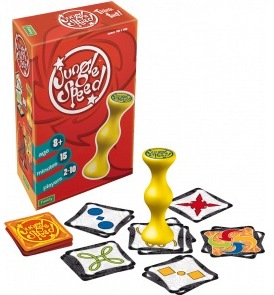 ught, for board games. This was until we started playing Jungle Speed.

Jungle Speed is the most popular game in Europe, with more than two million sold. This game made its debut in the U.S. this July at Toy”R”Us, Target, Walmart and other major and individual retailers across the country.

Jungle Speed is the fast and furious game of quick thinking and lightening fast reflexes.  Think classic card games Spoons or WAR, embellish the cards with abstract shapes and colors and add a call to action to race opponents to a totem.  Each player must be spot-on. Jungle Speed features easy-to-learn play for entertaining and animated fun for the entire family. The game can be played by up to 10 players and is recommended for ages seven and up.

How to play Jungle Speed

The Jungle Speed game is engaging and exciting.  The complete deck of cards featuring abstract images is divided evenly among all players.  They place their cards face down in front of them.  A bright yellow totem is placed in the middle of the table.

•       Each player, in turn, reveals the top card of their draw pile. As players become more familiar with the symbols, they flip cards faster.  Players are looking for identical cards.  Colors do not matter, only symbols.

•       If two cards are identical, those players must make a grab for the totem.  The faster player then gets to dump off all their cards to their unfortunate adversary.

•       To add to the difficulty, certain symbols on the cards are almost identical, which can trick a player into grabbing the totem by mistake.

•       Just when players think they’ve got it down, one of three special cards can temporarily change the rules and keep them on the edge.  Players may be called to make a grab at once, look for matching colors and not symbols, or even simultaneously flip cards.

My preschooler took some time to understand that similar designs of the cards are, indeed, only similar but not the same. However, when she grasped the concept, we really enjoyed playing. The game is also perfect for older kids and adults. We had some students over and they enjoyed playing it tremendously.

I was also happy that the game not only developed concentration but also kept the kids moving and jumping.

My toddler also participated in the game. She found great enjoyment in stealing the cards and running away with them. The cloth bag for keeping the cards was quite handy. We were able to put away all the cards without losing them.

One lucky reader will win a Jungle Speed board game ($19.99 value).

This giveaway is open to U.S. No P.O boxes

To participate in the giveaway, you could do any or all of the following:

This giveaway is closed.

Review/giveaway disclaimer: I received no monetary compensation for this review/giveaway. I received a Jungle Speed board game for review. This promotion is in no way sponsored, endorsed or administered by, or associated with, Facebook