Yes, we had a leapfrog party! Snacks for the party were mostly green, featuring green olives, cucumbers, celery, and grapes: 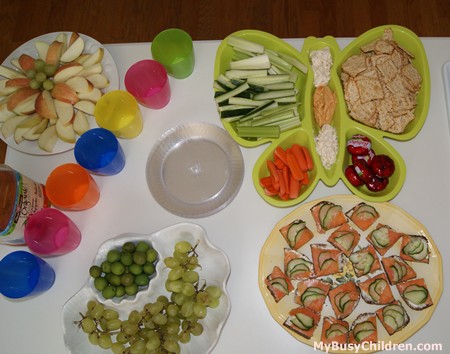 Activities of the party included:

Learning and coloring with Leapfrog printable activity sheets. There were several to choose from. 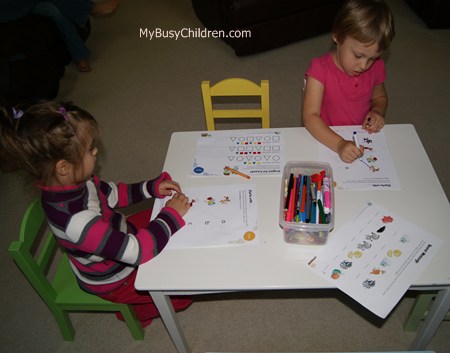 Kids also played on the LeapFrog LeapPad Explorer, which my kids monopolized first: 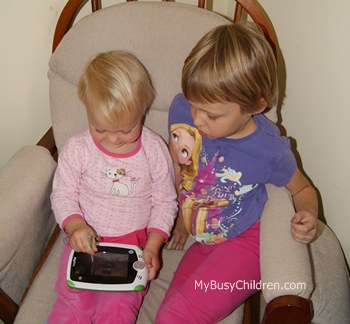 I liked that this learning tablet is sturdy. It is designed to be handled by kids. I think it can withstand even my two-year-old’s tantrums, which are often expressed by throwing things across the floor. I was relieved to see how protected this tablet is, especially, compared to a typical tablet.

In addition to learning letter, playing games, drawing, and watching videos on the LeapPad Explorer, my kids learned to use a built-in camera and video recorder. Now I have two photographers who take pictures of everything.

I like that I could shop for applications for the LeapPad by Category (ultra ebook, games, ebooks, creativity, expansions, flashcards) or by skill (reading/writing, math)

I thought applications were somewhat pricey, though. Since I am used to buying two to three dollar apps on the iPad, a twenty dollar Cinderella ultra eBook seemed a bit expensive. I understand that it is a different business model. LeapPad costs less than a hundred dollars compared to a seven hundred dollar iPad.

Also, it would be helpful to include users’ review for all the applications, and maybe give a thirty second preview to get a good feel for my potential purchase.

Originally I thought that it would be helpful to connect to Internet directly from the LeapPad to download applications. However, then I saw my kids playing who-knows-what videos on my iPad, I decided, that Wi-Fi-free devices have their advantages. With LeapPad, I will be able to have better control over the apps my kids use and things they can access online.

I wish the tablet came with a charger. We go through batteries very quickly. We replaced 4 AA batteries every day, which is not only expensive, but also inconvenient  and time-consuming. I have seen recommendations to use rechargeable batteries but a recharging capability in the tablet would be better.

Another popular activity was playing with the interactive map. My 4-year old enjoys demonstrating her new amazing educational toy.

While the LeapPad concept was somewhat familiar to my kids due to their frequent use of my iPad, an Interactive Map was a new toy with the capabilities we have never seen. It was definitely a hit. Forget about the kids, all the adults were just as much excited and could not help playing games on the map.

The map will tell you not only what countries are located on the map, but also about kids in those countries – what they eat, what music they listen, and what they like to do.

My four-year-old, whose name is Masha found a girl named … yes, also Masha, who lives in Moscow, Russia. She then was even more excited to learn that Masha in Moscow also eats kasha for breakfast. Then the girl on the map proceeded to explain that Kasha is a type of cereal. I hope kids will interpret cereal here as “grain” as opposed to “breakfast cereal” since Kasha is a type of porridge, which is made from cooked grains and eaten hot (e.g. oatmeal, cream of wheat). Oh well, I digress here and should stop before I go in to the debate about advantages of hot cereals over cold cereals.

It would be great if the map had a feature of switching languages. We could learn names of the countries in different languages.

All in all, the Interactive map is a great product. If I had it when I was growing up, learning geography would be so much easier.

The kids took turn learning about different languages and cultures and playing games on the map: 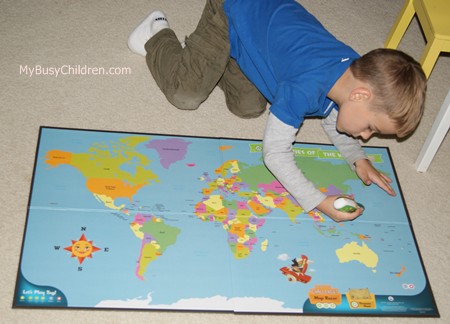 Disclaimer: I received free LeapFrog products in order to host a Learn, Create and Share Party. LeapFrog did not influence my opinions expressed here as a result.