We recently enjoyed spending an evening of chivalry, rivalry, and revelry in 11th century Spain at Medieval Times’ Atlanta Castle at Discover Mills. 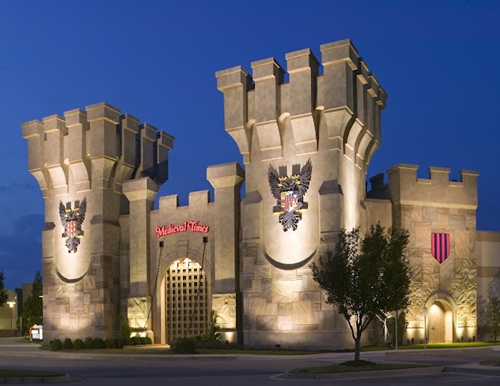 It was truly a night to remember with a royal court, knights, horsemanship, jousting, falconry, and feast!  We started off by arriving an hour or so before the show time to enjoy the Hall of Arms – a spacious lounge area that takes you back in time.  With all of the decor of a castle hall, including a massive fireplace, suits of armor, woodwork, stone floor, and ambient lighting, the aura sets the tone for the night to come.  There are plenty of photo opportunities with the royal court, the falcon and falconer, and even knighting ceremonies! 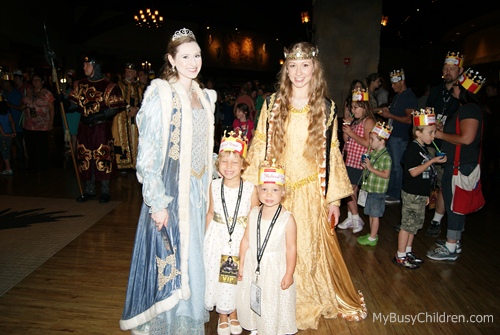 To keep the adults engaged, there is a full bar, sitting area, and gift kiosks.  The attention to detail and ambiance of the Hall is splendidly done – on par with any Disney experience. 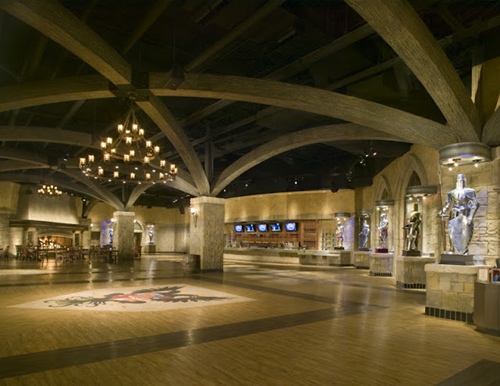 The “cast” ensemble comprises serfs (male assistants, bar tenders, ticket takers, etc.) and wenches (the female version of the surf). All speak with a very distinctive and uniform accent, addressing the patrons as “milord” or “milady”.  The surfs and wenches are very polite, happy, and helpful – but can be a little “rough around the edges” – completely in character.

On to the show… upon entry you are provided a crown with colors of a particular knight.  Since the backdrop for the evening is a jousting tournament, everyone in attendance is actually in the audience for the joust.  So, guests are called from the Hall of Arms into the Arena by color.  We happened to be in the Red and Yellow knight’s contingent.  The Arena is massive, seating several hundred people into 6 colored sections – Red, Black & White, Yellow, Blue, Green, and of course Red & Yellow.  Upon being seated, you are greeted – in our case, very loudly – by your “humble serf” (the waiter).  He explains that the joust is between the Eastern and Western kingdom and which colors to cheer for and which to boo.  After providing some instructions for the feast (described in detail later), the surf makes a quick exit and the show begins! 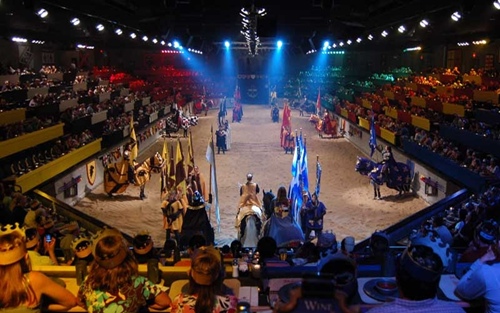 Starting with an unbridled/unsaddled horse being commanded by the unseen Master of Horse, the show draws the audience in.  I won’t give away the plot completely, but the highlights include the grand entrance of the royal court, followed by the knights.  There is a show of skill in which the knights complete at various tasks on the backs for their steeds.  This is followed by a stranger from the North bringing a gift to the king – which the audience gets to enjoy… really remarkable horses demonstrating high-skilled maneuvers.  Then, the joust gets underway.  We were not suspecting the speed and power of the competition.  The joust is real – completely.  Horses, knights, broken and splintered jousting sticks, falling off horses, and then the battle….  weapons are selected by the knights and the fighting ensues with passion and power with sparks flying from metal-on-metal blows until a victor is crowned. 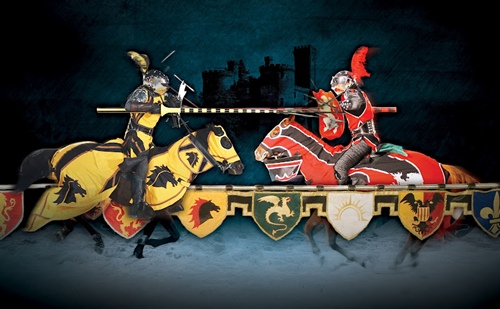 At the end of the tournament, the winning knight is awarded by the court – in our case, our Red & Yellow knight won.  The stranger from the north returns to clarify the gift to the king and the show reaches its climax.  With a spectacular finish, the audience left the Arena with loud and long applause for the cast.

As for the feast, it definitely gets second billing to the show, but it is rather delicious.  As people did back in “medieval times”, the audience eats without utensils.  Soup is drunk from a bowl.  The roasted potato, garlic bread, and main course, a baked half chicken and spare rib, are consumed with hands.  There is also a dessert to finish off the feast.  It was all quite tasty and sufficient.  Our girls didn’t finish their meal, so the surf brought boxes – it was just as good the following night for leftovers!

We have some tips for would-be lords and ladies attending a performance of Medieval Times.

Have you been to Medieval Times’ new show?  Feel free to tell us about it!

Disclaimer: we received complimentary passes to the show to facilitate this review.

Mister Linky’s Magical Widgets — Auto-Linky widget will appear right here!
This preview will disappear when the widget is displayed on your site.
For best results, use HTML mode to edit this section of the post.