How Grandfather Frost visited us

“When is Ded Moroz coming back?” –  I hear a few times a day from my two pre-schoolers.

When I was growing up, Grandfather Frost would bring gifts on the New Year’s Eve for me and millions of other kids who lived in Russia. Throughout the entire Holiday season we would go to Grandfather Frost’s parties, filled with games, dances, and songs.

Ded Moroz (Russian for Grandfather Frost) is generally a very active guy who runs, jumps, dances, sings songs, and has a magic ability to turn on lights on a Christmas tree. He also has a huge red sack filled with presents.

He would give a small present to all the kids in exchange for a “performance”, which could be a song or a poem. I must say that he preferred poems and songs about himself, holidays, or winter. So we, as kids, used to learn several holiday poems and songs in anticipation of the his visit.

It would be fun to have Ded Moroz come entertain the kids here, I thought a few months ago. The kids would love to see him. They know everything about him from books we read and cartoons we watch. They even know some holiday songs in Russian.

The next day I ordered a Ded Moroz suit from Moscow. I decided to save on the beard and buy it on Amazon. While this was a decent beard, it is not as big, thick, and long as Ded Moroz is supposed to have. I should have bought an authentic beard. Oh well, maybe next year.

A friend of ours agreed to dress up as Ded Moroz.  Both girls learned a couple of songs and poems anticipating his arrival. And when the day came. Someone rang our doorbell. 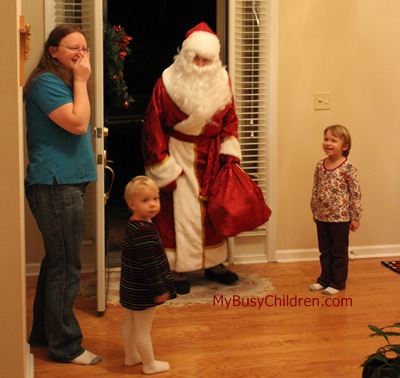 They genuinely believed he was real: 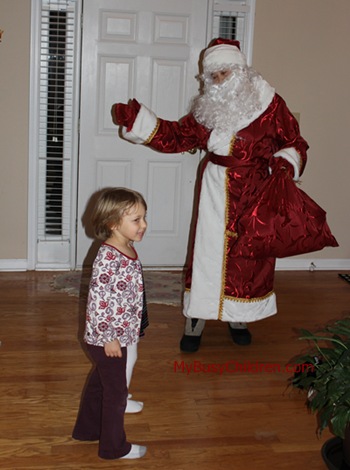 Svetlana danced in an attempt to collect more gifts:

Masha sang. They both got many presents. 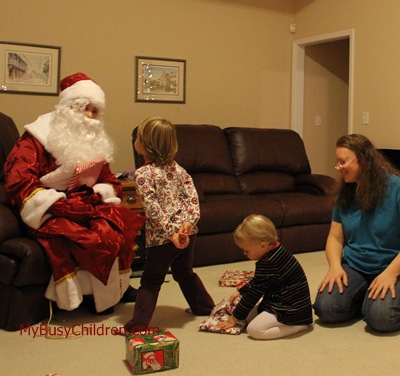 Now, my kids’ favorite pastime is to walk around the house with big red plastic bags filled with toys from their room saying in a deep voice: Hi, I am Ded Moroz. If you tell me a poem, I will give you a present.

Do you have a special Christmas or New Year tradition?

I am linking up at

Hosted by Krystyn at Really, Are You Serious?