We went to see the spectacular new threesixty° stage production of PETER PAN. This production features 23 actors, stunning puppets, epic music, dazzling flying sequences, and the world’s first 360-degree Computer-generated imagery theater set. I am excited to present the review of the Peter Pan show to you.

About the “round” Peter Pan performance:

One of the most striking elements of this new production is the setting in which it is presented. The threesixty° Theatre, allows for performance “in the round” in a 1,300 seat theater-tent.

The entire interior of the tent is lit with more than 15,000 square feet of Hi-Resolution video — three times the size of Imax screens — so that both cast and audience are immersed in a CGI Neverland. When Peter and Wendy fly to Neverland, the audience flies with them over 400 square miles of virtual London and beyond. 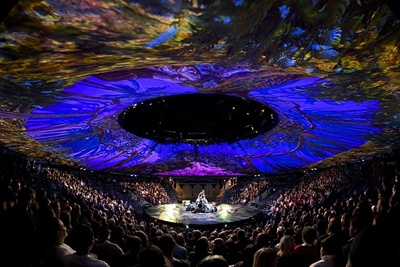 Peter Pan, The Boy Who Wouldn’t Grow Up was created by Scottish novelist and playwright J M Barrie. One night, Peter flies into the London nursery of the Darling children, Wendy, John and Michael, teaches them to fly and leads them to the magical Neverland, “second to the right and straight on till morning,” where they live with Tinker Bell, the Lost Boys and meet the notorious Captain Hook.

The tale of Peter Pan has been adapted many times since then including the Walt Disney animated film and a Broadway musical. However, it was not until this 2009 production, presented by threesixty° entertainment, that a production was performed in London’s Kensington Gardens, where J M Barrie was first inspired to create him and where the original statue of Peter Pan has stood since 1912.

This engagement will be the United States East Coast premiere of the threesixty° PETER PAN. Atlanta will be only the fourth location in the world to host this production, following London, San Francisco and Orange County, California.

Production of PETER PAN in numbers

• 12 projectors, delivering 360 degree projection
• 10 million pixels
• 15,000 square feet of CGI
• 400 square miles of virtual London circa 1904 were rendered
• The largest surround CGI venue in the world
• The world’s first fully 360-degree projected movie for live theater performance
• The tent, which stands 100 feet high, was shipped via boat, 6,000 miles from London to San Francisco.
• 200 computers took four weeks to create the images – it would have taken eight years for a single computer to render 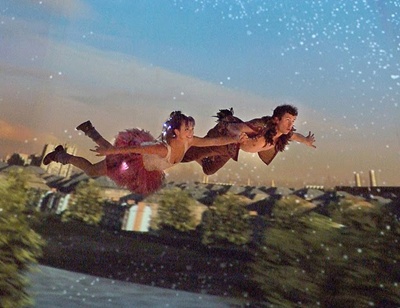 Theater-tent standing between the World of Coca-Cola and the Georgia Aquarium in Pemberton Place.

Tickets, priced from $35 to $75, can be purchased online at www.peterpantheshow.com, and by phone at 1-888-ppantix (1-888-772-6849). Premium ticket packages are also available, and include admission to the performance, drink voucher, souvenir brochure, and PETER PAN audio book.  Special behind-the-scenes “Into Neverland” tours will be available weekly throughout the run.

My review or why we loved the performance:

We thought the performance was amazing because it was such a multifaceted show. It was a combination of

The views were always changing. We were flying over London. We were swimming in the ocean. We were soaring over the tropics. We also found ourselves on the ship surrounded by restless waves. All the different settings powered by CGI made me feel like I was in the story myself.

The dance of the Tiger Lily who Peter Pan saved from Pirates was powerful and artistic. Mermaids were extremely flexible, they had no support as they performed areal acrobatics.

We found the crocodile amazing. What an ingenuous idea to use coat hangers in constructing it. The crocodile was truly scary roaring loudly at the public. At that point I understood why the show is not recommended for kids under five.

We were very impressed by the show. My daughter said that she loved it so much, she is coming back to this place. I am not sure whether she was referring to Pemberton Place or Neverland.

Review disclaimer: I received tickets to this event. The opinions provided are my own