I asked Masha who she wanted to be: a Cinderella, a Thumbelina, or a Winter Princess. No, she did not want to be any of that. She only wanted to dress up as a “Scary Witch”.

Svetlana wanted to wear exactly what Masha was wearing but settled on an orange version of a Witch.

Masha was running as fast as she could from door to door. Svetlana, although only one year old, was just as excited to walk up the steps of every house and get some candy. She diligently picked out the kind she liked and put the candy in her basket. If homeowners left a bowl of candy on the porch but were not home to open the door, she did not settle for the candy. She kept knocking on the door until I had to grab her and carry back to the road.

And here are the proud owners of the first candy of the day! 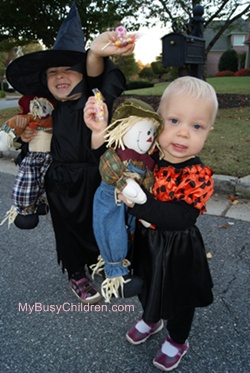